Whose (New Zea)land is This Anyway? 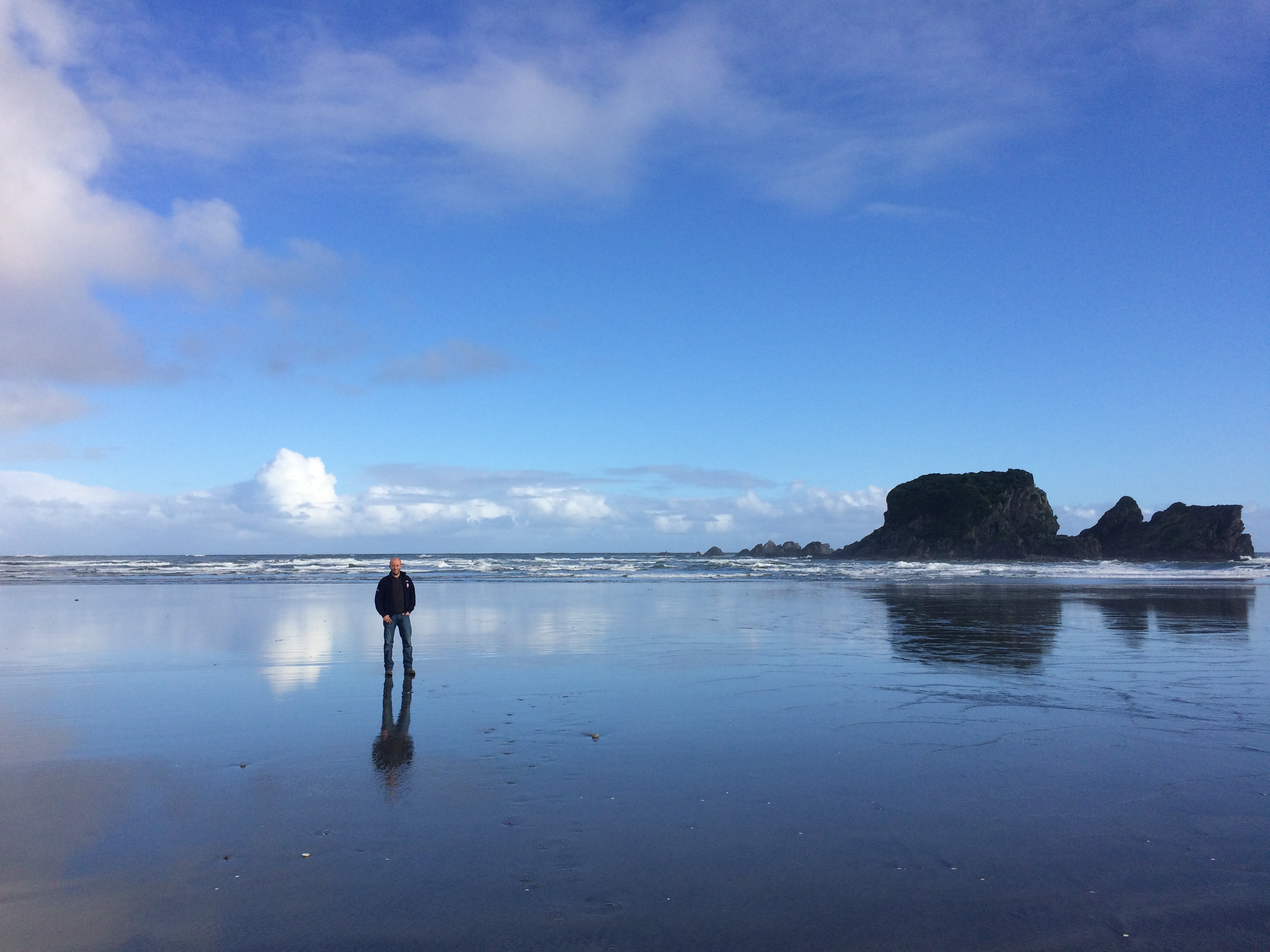 The ancient Maori story goes that a boy called Maui, half-man half-god, really wanted to go fishing, so he hid on board his older brothers’ canoe, called a “waka” in Maori, and only emerged when they were out at sea. He brought a wonderful fishing hook with him, made from the bone of his great grandmother’s jaw, with a sparkly bit of abalone to shine in the depths, and some fur from a dog to keep it warm far under the ocean waves. He wet the dog fur with blood from his nose to bait the hook. Maui then convinced his brothers to paddle far, far into the middle of the ocean where there would be an abundance of fish to catch, and there, he cast his fishing line.

No sooner had Maui’s hook reached the ocean depths before a gigantic fish was lured and swallowed it! The ocean foamed and churned as Maui struggled with this enormous creature – he was not going to let himself be embarrassed in front of his brothers! He heaved and tugged and pulled, just as the fish swam and fought as hard as it could, and in the end, Maui won the struggle, and hoisted this huge fish from the deep up to the surface. 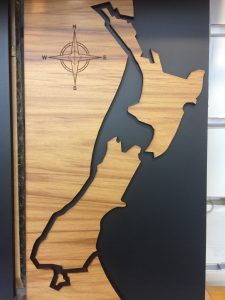 From top to bottom: huge fish, canoe and anchor (aka. New Zealand) 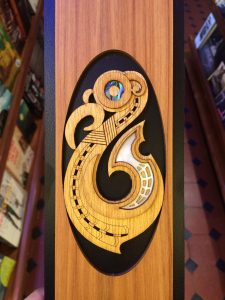 The Maori landed in these islands now commonly called New Zealand around 800 years ago, after skilfully navigating their way down from South East Asia. They found a geothermal active land, populated with many birds, both flying and flightless, and reptiles and insects galore. The only mammals were a couple of dolphin and bat species – there were no land mammals at all.

When Captain Cook arrived in the late 18th century, making first contact with the Maoris after a failed attempt by Dutchman Abel Tasman in the 17th century, Cook had to moor his boat more than two miles out at sea so his crew could sleep for the sheer volume of the bird song coming from the shores.

I was therefore surprised, when entering the deep forest around Rotorua on a canopy zip-lining expedition, that it was almost completely silent. Only a five-second snatch of birdsong reached my ears through the rain. The guides explained that many of the forests in New Zealand have fallen silent due to the mammals that were introduced, purposefully and unwittingly, by the European settlers. For example, stowaway rats from the ships reproduced en masse and started decimating many large bird species by eating up their eggs before hatching, as well as grubs and other food that birds would naturally feed on. Stoats introduced to keep down the rabbit population almost eliminated the kiwi bird. This fluffy flightless bird’s only defence strategy is to sit completely still on the forest floor like a tree stump, which might fool a flying predator from the skies, but not a keen-nosed stoat who cannot be bothered to chase fast-moving rabbits when a kiwi bird just sits and waits to be eaten. Possums were also introduced to balance the eco-system but due to the lack of noxious leaves that they otherwise feed on in Australia, they do not need to take long naps to digest (which other animals otherwise capitalise on to catch them), and instead, the possum population multiplied to over 30 million, on the fresh non-toxic foliage of New Zealand. They also became omnivorous and started eating the local birds. All of this has led to silent forests, where 1000-year-old trees stand majestic and undisturbed. 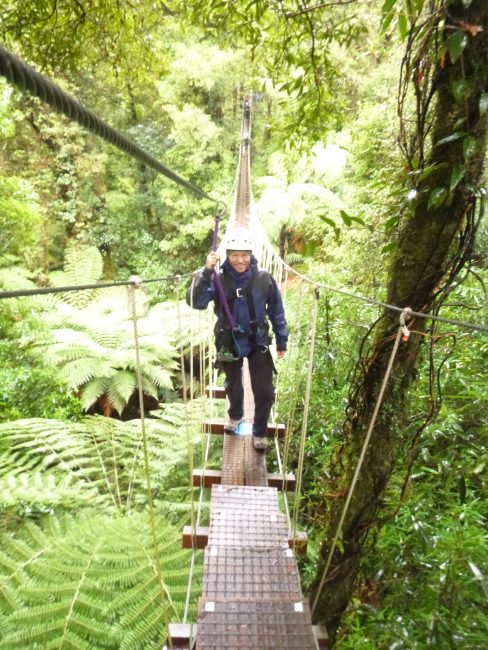 Climbing through the silent canopy in the forests of Rotorua

Some of the ancient tree species in New Zealand are related to trees found in South America, which bears testimony to how geographically close they once were on the super-continent of Gondwana, 200 to 500 million years ago, before tectonic plate movement separated them into the continents we know today.

Local trapping efforts are underway, funded by the Rotorua Canopy Experience company among others, to eliminate the rats, possums, and stoats in this patch of forest close to Rotorua on the North Island, to give birds a safe place to live and breed. A “reset”, so to speak, to the state of the ecosystem before the European settlers arrived.

In the town of Wellington, furthest South on the North Island, botanic gardens showcase shrubs, flowers, bushes, and trees from nearly all the Earth’s continents. On a hilltop, pine trees planted in the 1860s are standing very, very tall and strong against the storms blowing in from the Cook Strait that separates the North and South Island (or Maui from his giant fish). These trees were brought to New Zealand by European settlers and planted to test if they would flourish, but others, like a gnarled two-hundred-year-old hinau tree is native and rooted itself before any European set foot here. 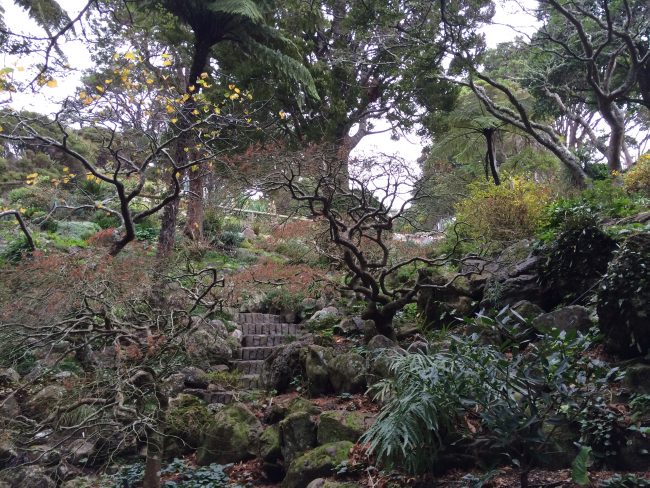 The Wonders of Wellington Botanical Gardens

As I take all this in, I wonder: whose land is this anyway? In light of the United Kingdom referendum that took place on European Union membership during my travels here, a large preoccupation of ours, as human beings, seems to be whether You are on My land and whether I want to allow You to be there.

I wonder how it was for the collective consciousness that I believe vegetation has when bird species, flying and flightless, multiplied and started to eat seeds and roots. How about when the Maori landed 800 years ago and eradicated most of the flightless bird species, which made for a relatively easy food source? The moa bird, as one example, stood two to three metres tall and had massive legs with claws and an impressive beak to defend itself with, but it could not withstand the Maori hunters’ skill. And while Captain Cook and his crew seem to have made cooperative inroads with the Maoris, intermarrying, taking the Maori sailors out on tall ships as crew, trading valued goods such as muskets and abalone, how did the Maoris feel when their tribal lands were bought up and settled by Europeans? How about when the United Kingdom started to use New Zealand as a penal colony — lesser in size than Australia, but all the same? Whose land is this really? 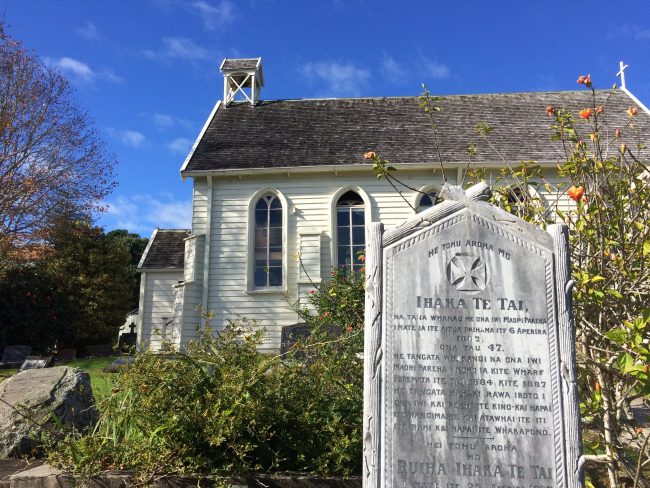 The Church in Russell – complete with Maori and English tombstones in the graveyard, and bullet holes in the church building!

As I walk around in the cemetery of Russell, the first capital city in New Zealand on the shoreline of where Captain Cook made landfall, I notice Maori graves interspersed among ones with European names. I almost could not believe it, presuming that there must have been substantial segregation and racism here as there has been in many other places where European settlers arrived. An old white-skinned gentleman called out to me: “Are you looking for your grandpa’s grave?” He goes on to tell me that his wife, who is very fair-skinned with grey-blonde hair and blue eyes, discovered that her great-grandfather was Maori, and they had come to look for his grave. He jokes with me, purposefully within her earshot, that he did not know he had married a Maori girl — and she retorts from the other side of a row of graves that she did not know she was one! And this is all in good humour, friendly teasing and jest, as we stand at the foot of both Maori and European settler graves.

While I cannot give any intellectual answer to whose land this is, it is certainly a land in which everyone can rest, and for that, I am very grateful as I continue exploring the natural beauty and warm friendliness here on my camper van trails.