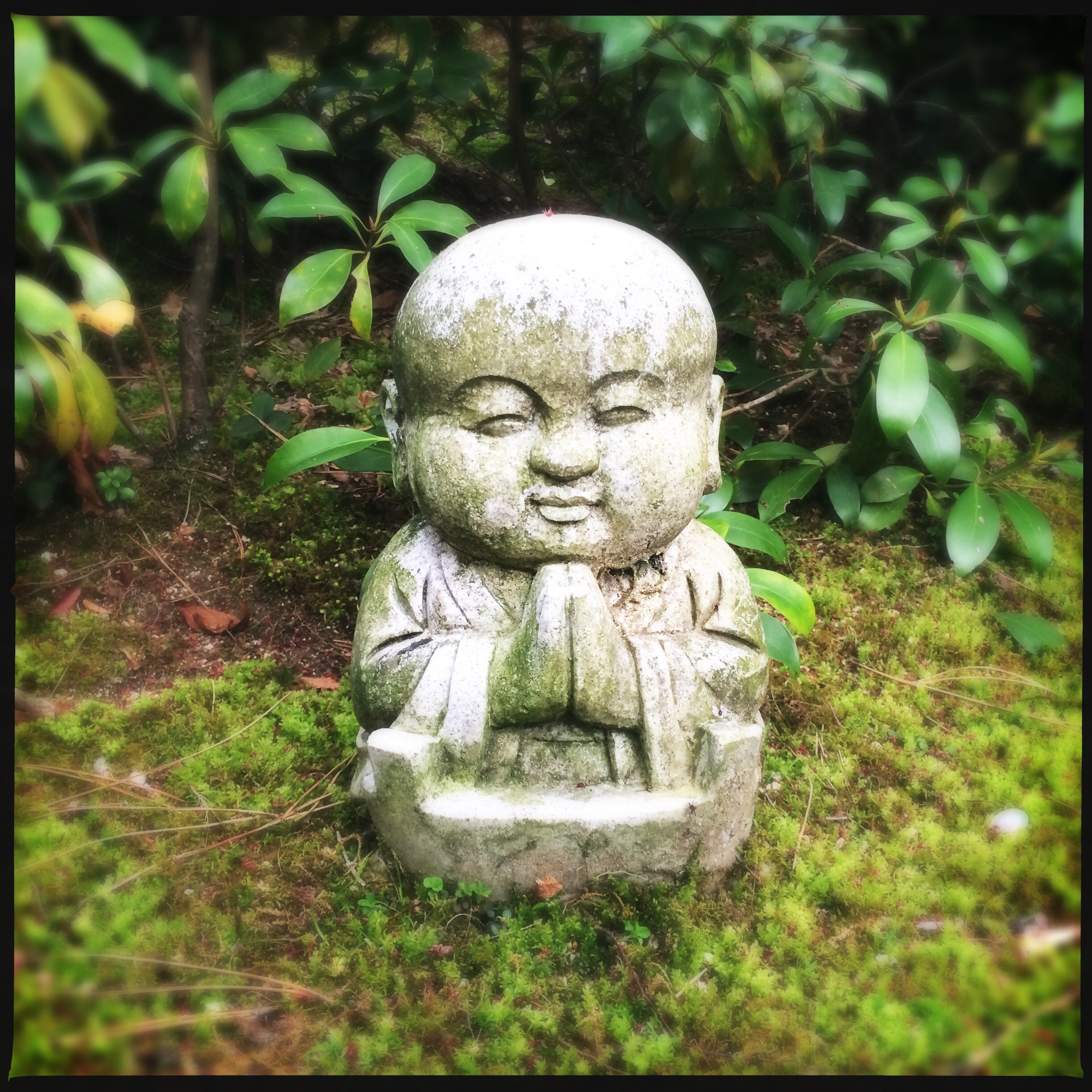 30 floors up, the view over the Shinjuku district in Tokyo is breathtaking. I am perched in the skies, in a high-rise hotel room, contemplating these last few weeks of travels around Japan.

I have fleeting memories of monks dressed in purple, white and gold walking in a long line in the Asakusa district’s temple park. Distant echoes of their voices raspily chanting in a nearby Shinto temple, to the beat of a drum. The open and profound feeling from the many shrines with their Torii gates, decorative ropes and white paper lightning shapes suspended up high, marking the entrance to sacred space. The peaceful ritual of walking up to these sacred places where various deities are believed to be enshrined, bowing down to them, clapping twice to announce one’s presence and desire for contact, silently praying to them, and then bowing twice again. The chink of the lucky 5 Yen coin with its hole in the middle that is flicked into the wooden box in front of the shrines as an offering. 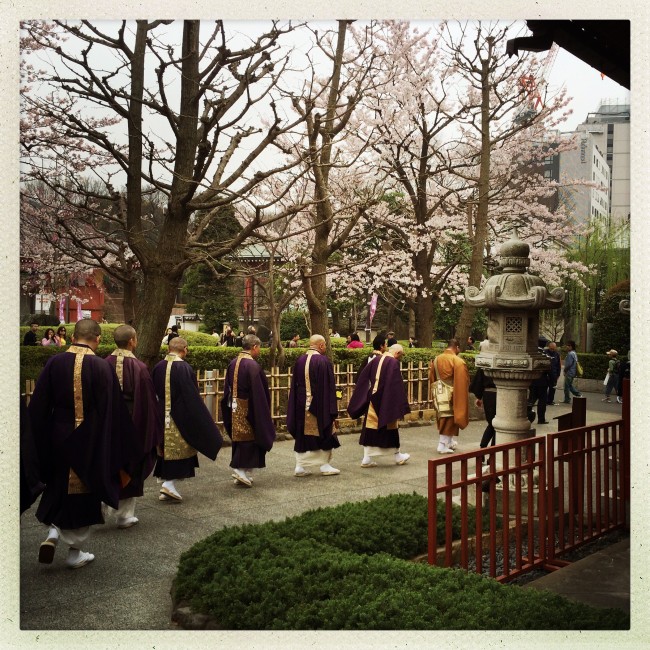 Memory flashes from handicraft shops where they sell wooden shrines meant for private homes, kamidana, and little plaques that ancestors’ names can be written on and revered inside those shrines – because ancestors are also worshipped in Japan, and provided with little tea bowls inside their delicately carved wooden spirit homes.

Every hotel room or countryside ryokan guest house that I have stayed in, no matter how small, has also provided a minimalist and beautiful sacred space in the room. Along one wall, there would typically be a wall hanging with Japanese calligraphy, and a polished flat wooden slab on the floor, sometimes with a flower decoratively arranged according to ikebana principles. 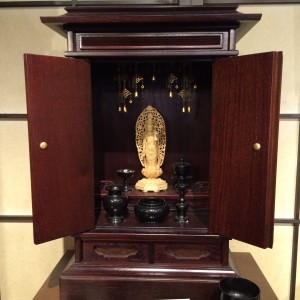 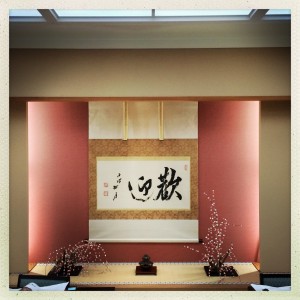 A guide explained to me that the Japanese are primarily Shinto, a nature-worshipping polytheistic faith with animistic elements: acknowledging the spirit in all things. Shinto translates as “way of the gods”, and the deities involved, called kami, are myriad. Kami alludes to phenomenona that inspire wonder and awe, which can be as much in nature as in people. However, Shinto is about the here and now, and therefore does not accommodate an afterlife, so Japanese people often -and very practically- become Buddhist at death, getting a new name from a priest and thereby securing themselves an afterlife.

Personally, I find that wonderful, and that may very well be the Interfaith Minister in me who is smiling broadly! 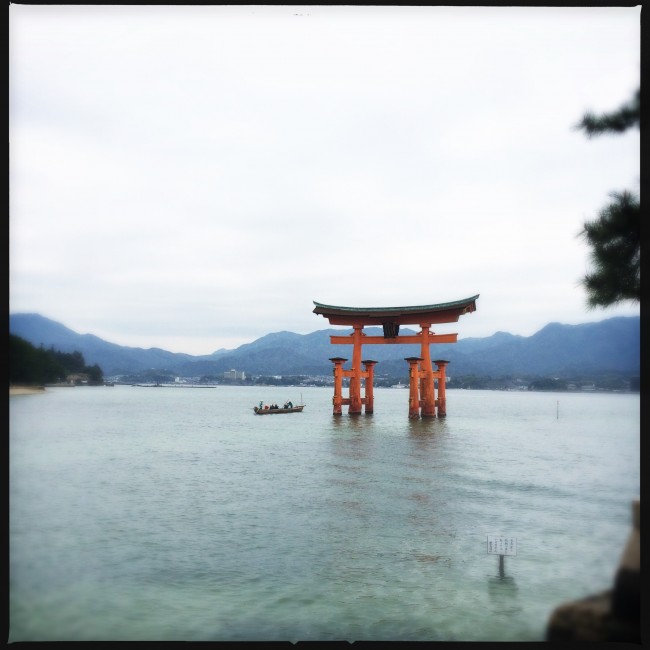 As I look out over Shinjuku’s forest of skyscrapers this evening, it is like a sea of lights – yellow window dots, pulsing reds on rooftops, streaking whites from trains… The sky is too overcast for stars, but given how hazy it is in the daytime, I wonder if Tokyo ever sees many stars anyway. And among all those artificial lights on buildings that reach for the invisible stars, there is a large black expanse. It reminds me of a lung.

It is a large inner city park called the Shinjuku Gyoen National Garden that offers the colourful delights of cherry blossoms in spring and maple leaves in autumn. Not a single light from inside reaches my perch at night though. This integrated contrast of nature and city is also in the Shinto spirit, as the salarymen who gather after work under falling cherry blossoms to drink and eat together, and the endless little pot plants outside urban houses also give testimony to. 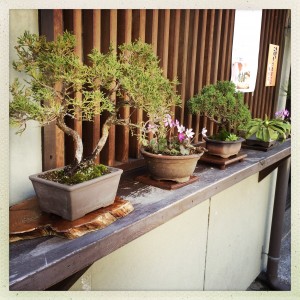 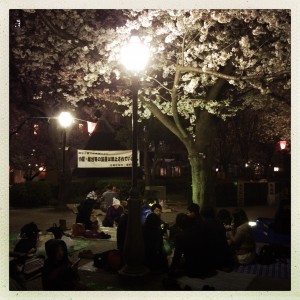 In London, I do not know if pot plants standing freely in the street outside someone’s house would last very long before being broken, someone relieving themselves in them, or just being stolen entirely… And yet here, in the packed streets of Tokyo, they stand unscathed in their multitudes. Nature gently nurtured, the spirit in all things being tended to.

A dear teacher of mine fell ill while I was travelling here, and it felt completely natural to write a dedication to her on a wooden plaque at a Shinto temple and hang it on the prayer board. The boards are blessed by the priests, and then all the plaques are burnt after three months – perhaps to ensure the prayers rise up to be fully heard, or perhaps just to make room for new ones… My contribution felt so very welcome there, without any further ado or need to be inducted into Shinto ritual. My heart was open, my soul spoke, and I felt completely heard. This seems to be the essence of folk Shinto. 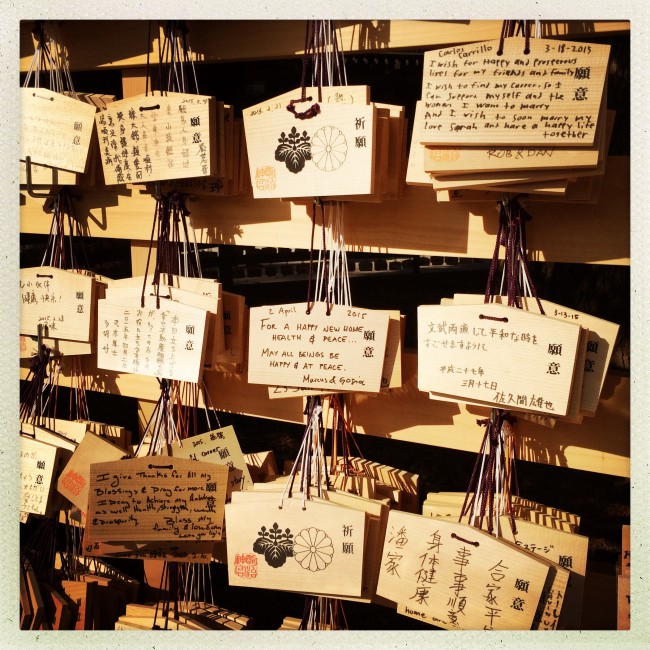 Over these weeks of travels, I have meandered in Zen temple gardens of astounding beauty at Tenryu-Ji in Kyoto, offered my gratitude at a mossy shrine next to an old shogun castle in Matsumoto, purified my hands and mouth from a fountain and tried to regrow my receding hairline in jest with the blessings of sacred incense smoke at the Senso-Ji Temple in Tokyo. I have respectfully walked through the side of the largest Torii gate in Japan at the Meiji-Jingu Shine as the centre is reserved for deities, rung out temple bells three times at the Daihikaku Senko-ji Zen temple in Arashiyama, trekked to the top of sacred Mt. Nisen on Miyajima Island to find a band of delightful little stone monk sculptures, and walked a lantern-lit path at a nighttime Kyoto shrine called Hirano-Jinja. 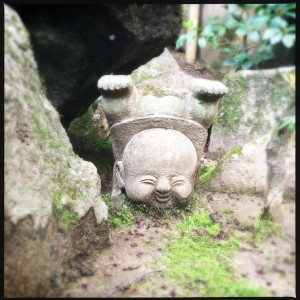 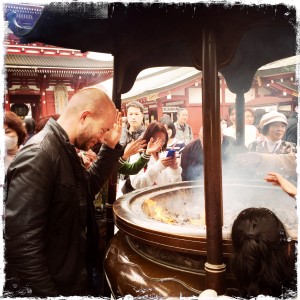 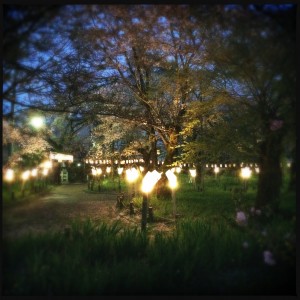 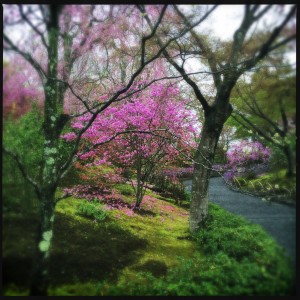 I feel like Shinto, which acknowledges the spirit in all things, has also allowed and warmly welcomed the spirit and connection with divinity in me, in playfulness and prayer. And it has invited me to look more deeply, feel more profoundly, and connect more humbly with the divinity of the natural world all around me.

Now the darkness of the inner city garden in Shinjuku also welcomes my weary eye from my window, and gives me rest from all the dazzle of 21st century Japan.

Sleep well, Japan – I rest with you in Shinto spirit tonight.