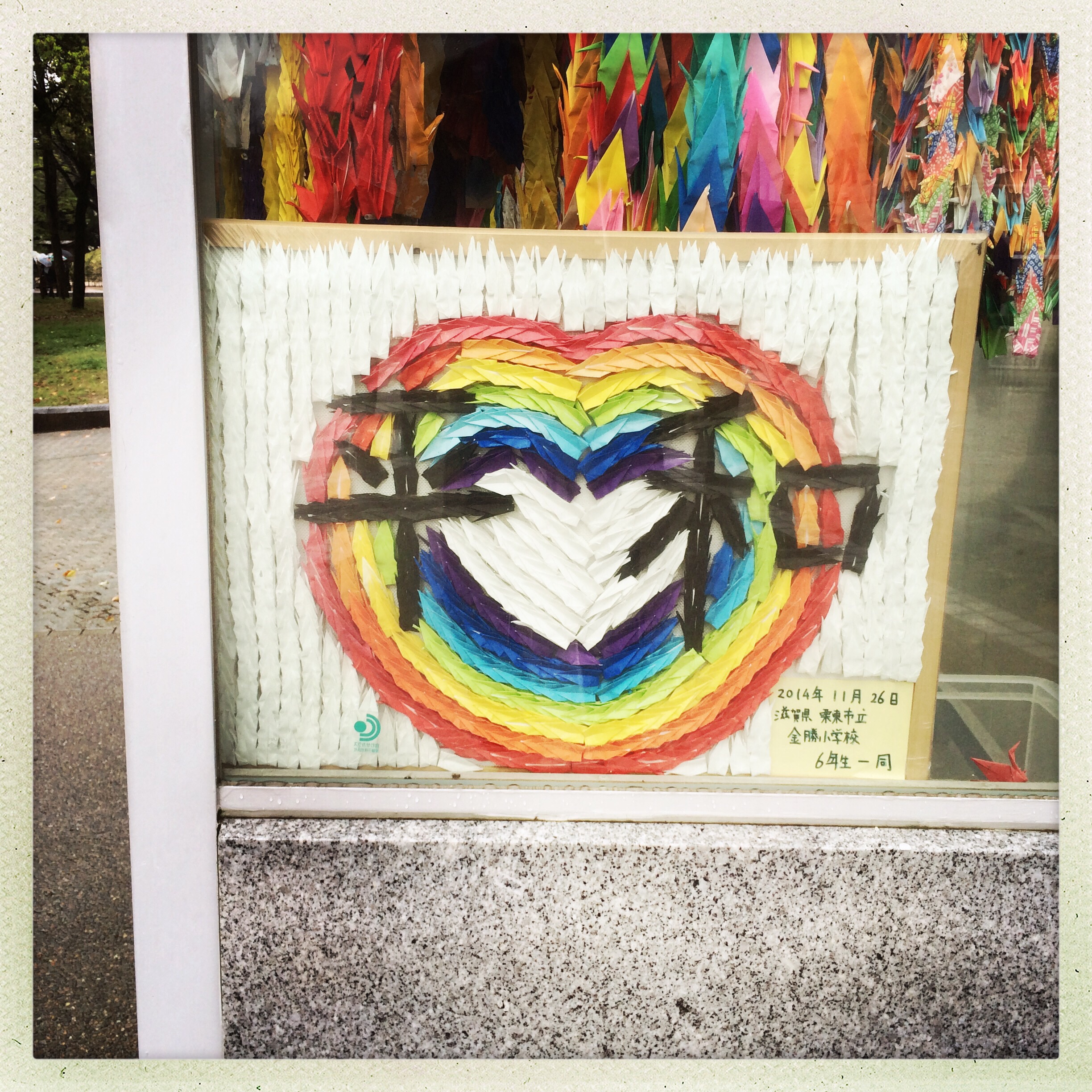 It is raining in Hiroshima.

I am walking towards the Peace Park, which is at the hypocentre of where the atomic bomb was dropped over the city in 1945. My shoes are getting soaked from above and below. Under the umbrella, my steps feel heavy, even as I dance and jump around puddles to minimise the soaking.

A sense of gravity is settling in me. This is serious. Terrible and important things happened here; hundreds of thousands perished, and the course of history was imprinted with the mark of atomic force, used by humans against other humans for the first time.

The first monument I spot along the river through the rain looks like an upside down pagoda, with a goddess statue and peace doves on it, along with hundreds of colourful garlands hanging behind the goddess. This is a monument to the school children and students aged 12 and up, who were mobilised during World War II to help the war effort, and perished therein.

At first, this does not touch me – it does not feel real. Then I read the inscription, which explains that parents donated money to create this monument out of concern for their children’s souls, taken from this world before they could bloom into their full promise. They wish for them to rest well and in peace, in spite of this. Then I feel like crying – for the first of many times as I take all this in. 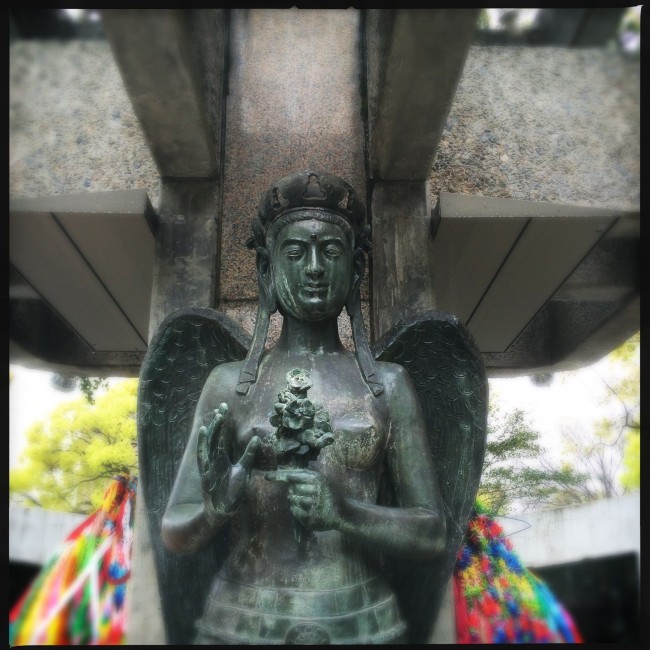 Next, along the river, is a large derelict-looking building with a naked steel beam dome on its roof, and exposed brickwork and twisted steel hanging out. The multilingual panels on the fence around it indicate that it is the A-Bomb Dome, a World Heritage Site. These are the only remains still standing in Hiroshima from a building that was a-bombed – and it is carefully maintained to keep this exact appearance. The atomic bomb went off almost directly over it, some 600m in the air, and the blast tore downward and collapsed the floors and instantly killed everyone inside. The walls, however, managed to remain standing.

The rain splashes down on my umbrella as I look skyward over the building, where that bomb exploded in mid-air.

We did this to each other.
I feel the lump in my throat, as I remember that this was only 70 years ago. Not in the medieval Dark Ages, or earlier, but in the 20th century. 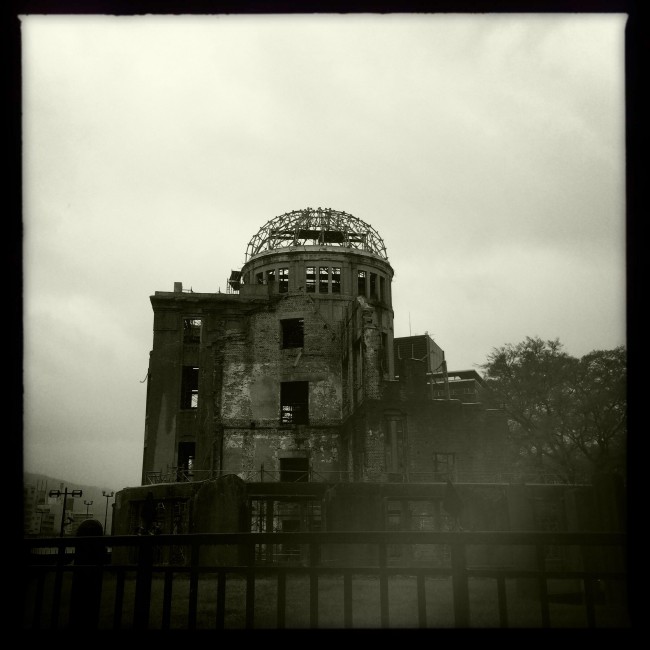 I cross the river, as the rain continues pouring down. This is where the Peace Park begins in earnest. In the Tourist Information office, there are huge ink stamps in red and blue that visitors can adorn their maps and guide books with. They express a wish for global peace, around motifs of the A-Bomb Dome and a dove sculpture. There are also T-Shirts that very appropriately display messages like “No Nukes” and “Hiroshima (heart) Peace”.

I have heard that there is a flame burning here somewhere, which will only be extinguished when the last nuclear weapon on Earth has been dismantled. I wonder how it is faring in all this rain, which is apparently typical for the cherry blossom season…

On the way there, I take a detour via a clock tower with statues of children and a crane ready to take flight. The crane is a bird of peace in Japan. All around it are booths with an astronomical amount of coloured paper cranes, assembled in garlands, set in landscape reliefs, collected in buckets, and otherwise gathered and sent to Hiroshima from children around the world in their hope for peace. It was inspired by a little girl who was at Hiroshima when the bomb was dropped, and while she managed to survive in the short-term, she later developed leukaemia. She believed that she might be saved if she could fold 1000 paper cranes, but she passed away before she finished. Her school friends decided to finish her project for her, and started the tradition of paper cranes being folded by children around the world and being collected here.

With this story, tears well up in my eyes again. 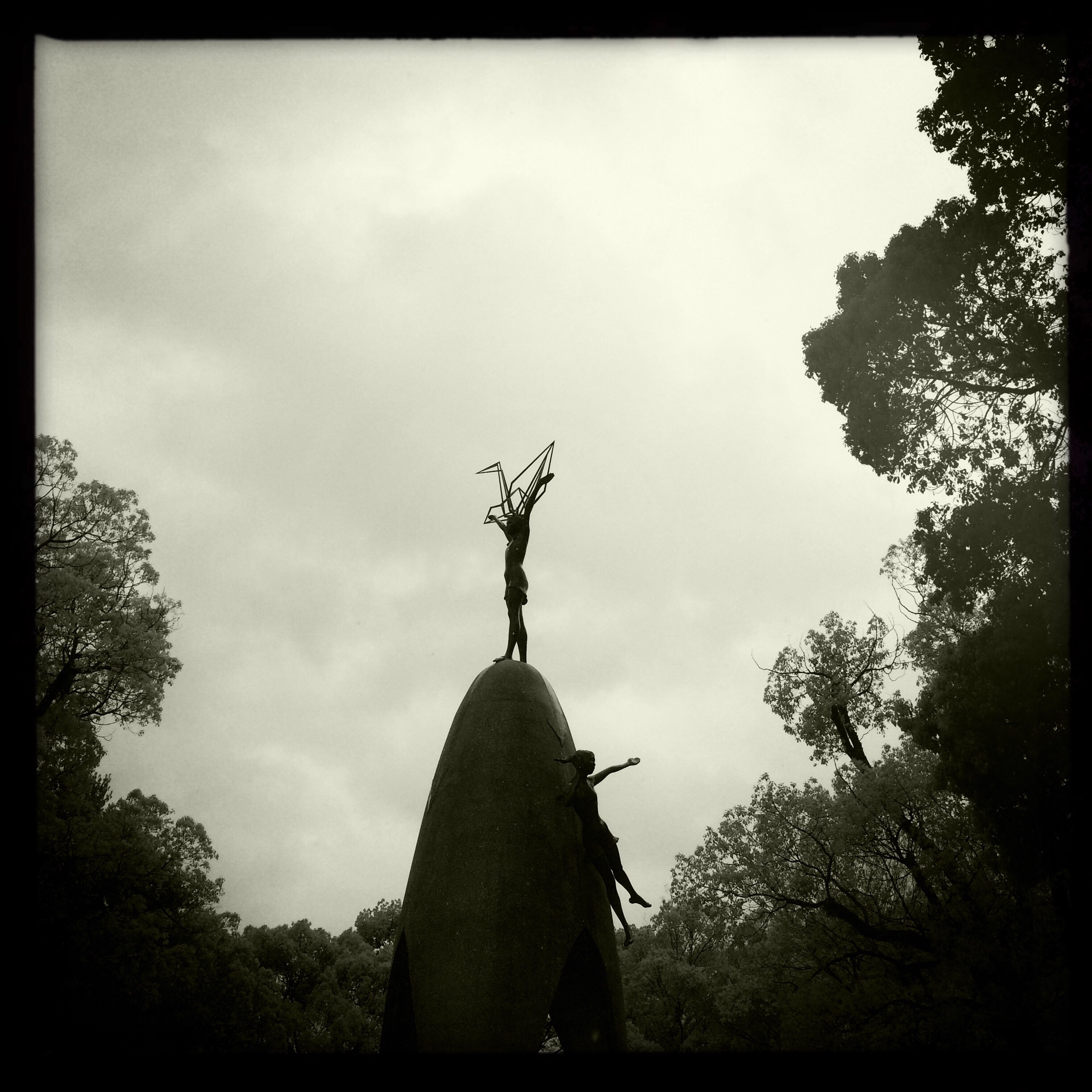 I walk on, and find a huge bell. Next to it is a sign which asks visitors not to ring it too forcefully as it is delicate, and to wait until it has fallen completely silent before ringing it again. But this means that ringing it is acceptable in the first place, and that is precisely what I proceed to do. It feels ceremonial and important, to swing back the horizontal wooden log, and then let this enormous peace bell ring out…

I wait till the beautiful echo has died down completely before stepping away.

One of my teachers recently shared an insight she had about the nature of this earthly plane. Perhaps souls come here, and choose to incarnate here, because it is a plane of existence where there is war… and peace, and everything in between. If those extremes were not available on Earth, then souls would miss out on learning about them. Perhaps Earth is the classroom for souls called “War & Peace”. I imagine the one hundred thousand souls who perished in Hiroshima between 8:15 and 8:20am on August 6th in 1945 may have something to add to this lesson.

Their ashes are buried under a mound nearby, where an interfaith ceremony of remembrance and peace is held every year. This lesson is not to be forgotten – so many died so that we might learn it for ourselves, too. 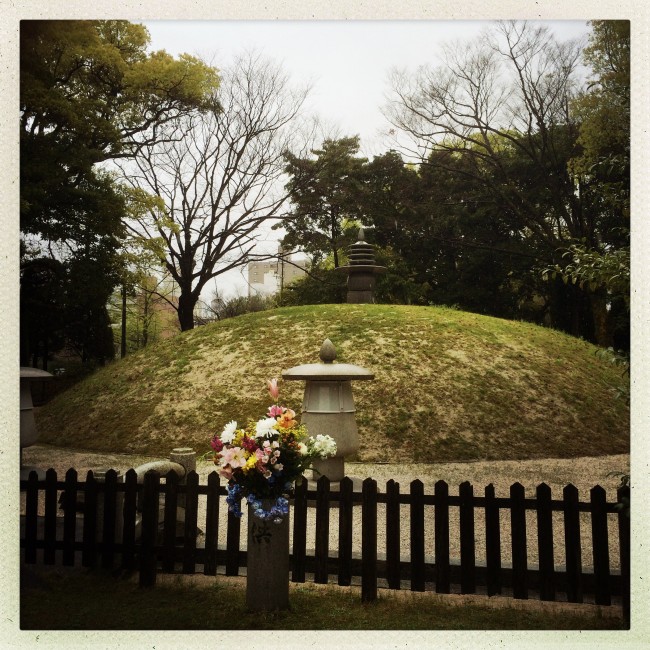 And then, finally, I find the flame that burns in even the most persistently pouring rain – and will do so till nuclear weapons are no more.

It feels both courageous and tragic at the same time. Like a peace protest that steamrollers are closing in on. But I want for that flame to carry on burning – because without the hope of peace, there is only war here on this Earth, and that is not the only thing that so many billions of souls are here to learn. War AND Peace, before we return home to the world of souls and the spiritual state that preceded the split, which gave rise to war in the first place.

There is a certain viewpoint where visitors can stand that lines up three points in a perfect monumental axis: the shrine that contains the names of those who perished under the Hiroshima atomic bomb, the peace flame, and the A-Bomb Dome. This feels solid and grounding in my being: from this perspective, the flame looks like it is burning inside the Dome yet again, but it is for peace, and it is looked over by all those who died from the A-Bomb. A necessary balance in things, from the present moment spanning back to that day in 1945. 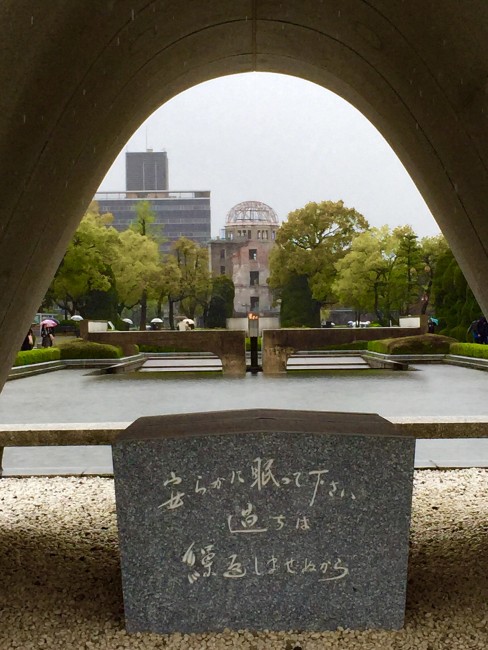 A short walk away, I find a large letterbox-shaped opening in a polished stone-faced wall. Inside, it frames a minimalistic clock dial sculpture, with the hands frozen at 8:15. In front of that clock dial, there are piles of rubble, broken brick and concrete debris, all salvaged from the blast site. That is when time stopped for so many thousands of people. I imagine the dark angel of Death sweeping down mercifully to fly their souls home — in a wide delta wing formation to make room for them all. 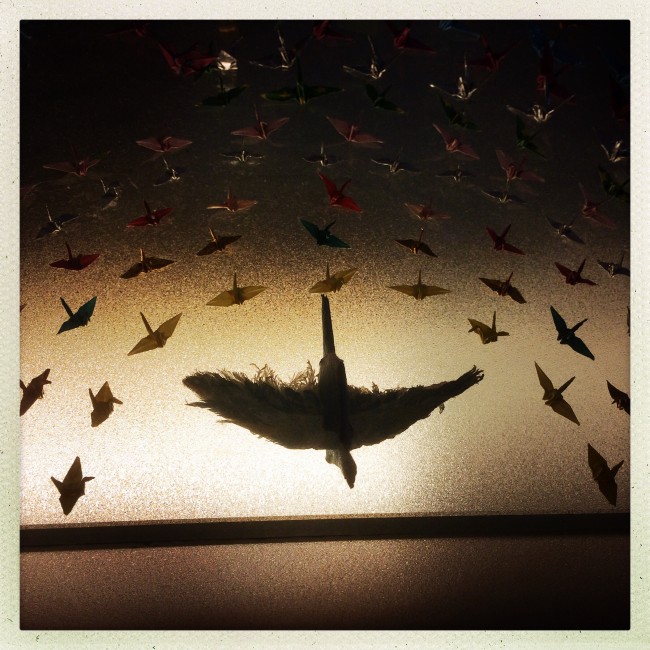 Below the ground here, I find the Hiroshima National Peace Memorial Wall for the Atomic Bomb Victims. The access walkway sweeps downward in a spiral, going deeper and deeper, further and further back through time with each turn. At the bottom, guarding the entrance to the Remembrance Hall itself, stands a Japanese man in a handsome uniform who bows to greet each visitor. I bow back instinctively. He is somehow perfectly placed here, to make all of this authentic. The A-Bomb really happened, and the wish for peace is really real.

In the centre of the dimly lit circular hall, all stone and ceramic tile, there is another clock dial. While it is also frozen in time at 8:15, water runs over and down it constantly. I thought I got away from the sound of falling water as I escaped the rain inside, but here it is again.

As I sit in the hall and learn more and more about what an atomic bomb does as it explodes, with the huge fireball and wave of intense radiation it releases, I come to understand that the majority of those who perished immediately were burnt to death. Some tried to reach the river to quench their burning flesh and lungs, and perished there, begging for water. 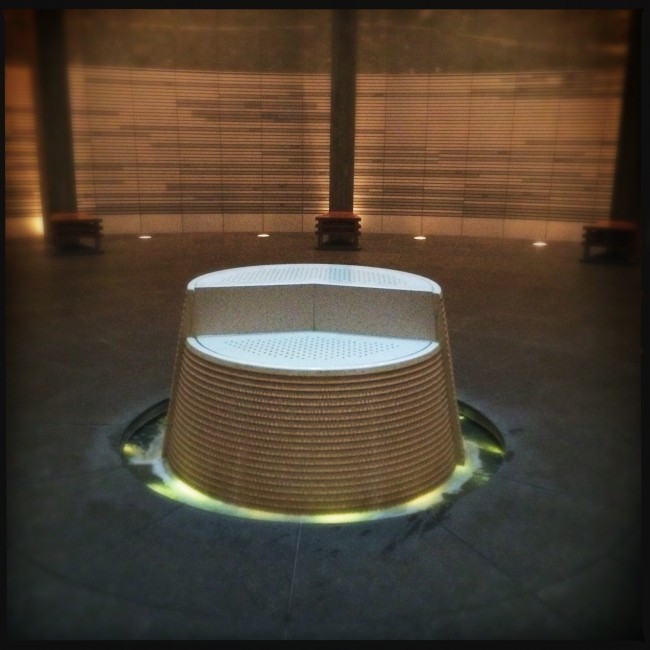 Suddenly I do not mind the rain over Hiroshima in the slightest.

The 360 degree panorama on the wall tile relief shows the landscape from soon after the bombing. It is in desperate need of water, just like the people. I wish the rain could reach back through time to help.

As I finally walk away, to a nearby shopping arcade where fluffy and cute things abound to distract from all that the Peace Park will not allow to be forgotten, a hope and a blessing rise up in me:

“May the rain quench the burning wherever there is pain.
May it bring flowing peace to hearts that grow tired of war.”

And even further away, along the moat that surrounds the reconstruction of Hiroshima Castle, which was otherwise completely destroyed by the A-Bomb, I notice a large eucalyptus tree that looks older than any other tree I have seen in this city.

And sure enough, it is a survivor of the A-Bomb, attests a little plaque. With just over 750 metres’s distance from the hypocentre, this tree ducked the angel of death on that day, and continues to sprout its enduring leaves, generously providing shadow and shelter in the sun and rain. This warms my heart.


Hiroshima, arigato. I bow to you.