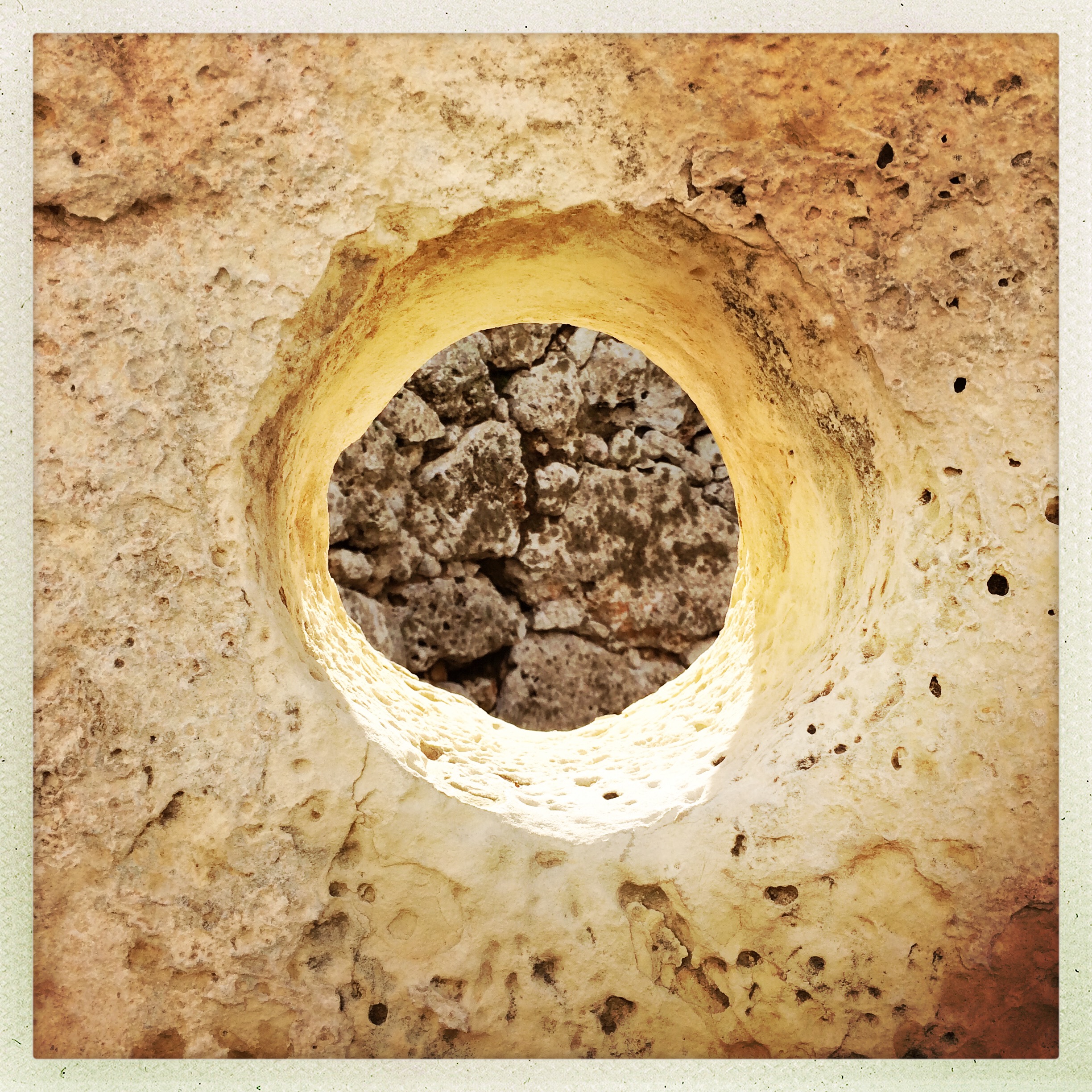 I walk among mystery in the warm February afternoon on the Mediterranean island of Malta.

Giants? Phoenicians? Aliens? Who carved and arranged these gigantic slabs of limestone in such evocative forms on the hillsides?

I am taken by the enigma of the so-called Temple Builder people who erected these megaliths in Malta. It is, of course, not certain that the stone structures were even intended as temples, since next to nothing is known about the prehistoric people who inhabited the Maltese islands at the time, but it is a fair guess. 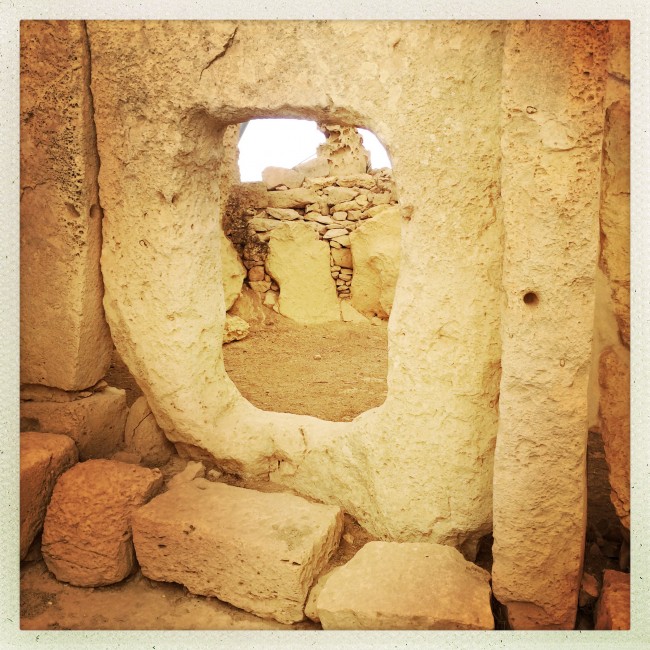 The conjoined stone circles, which lost their corbelled roof structures long ago, channel the sunlight in a carefully designed way at summer solstice and spring and autumn equinox, via holes drilled at specific angles, right through the megaliths. There is also a succession of chambers, smaller and smaller, with altars at the end, echoing the layout of places of worship as we know them today: a journey through sacred spaces till the holiest of holy chambers – where only the guardians of the faith are allowed to enter.

As I explore the archeological sites of Hagar Qim and Mnajdra, sited above the coastline in this dusty and stony landscape, I feel a pleasant emptiness. The sands of time seem to have eroded the imprint of what once took place here. Or perhaps I am simply unable to pick up the traces… It creates a canvas onto which I can paint my own imaginings with ease. 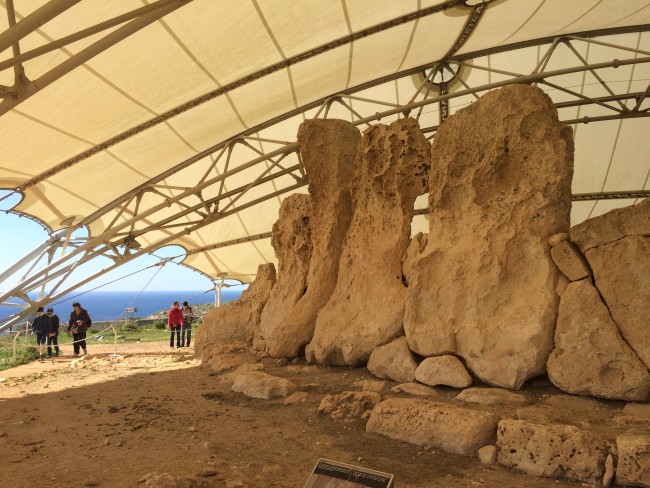 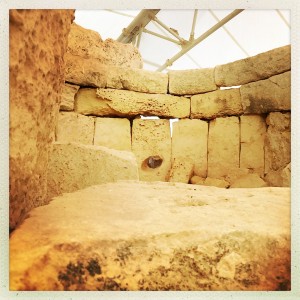 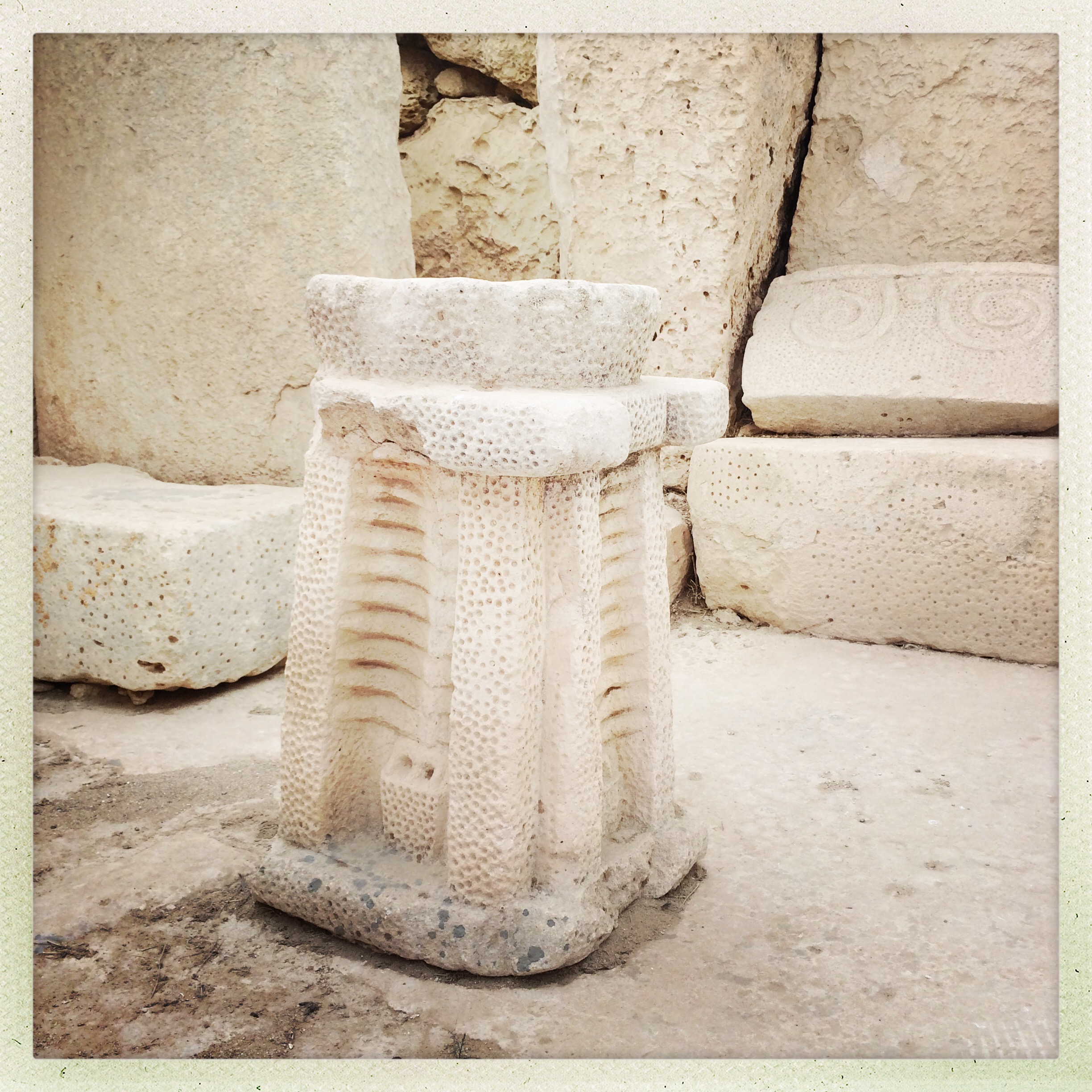 On the northernmost Maltese island of Gozo, another limestone megalith formation bears the name of Ggantija, from the “giants” that local folklore attributes the construction to. And a good job they did, whatever their stature, some time between 5000AD and 3500AD, since these megalithic temples remain the oldest freestanding structures in the world.

A local poet was inspired to imagine the human stories, in their elation and tragedy, that took place among these huge stones. I understand the temptation to give words and gestures to this blankness and silence, with poetic license and a sense of ritual. Here is his poem:

In the light of the lovely moon
all through the sweet hours of the summer nights
there in the hush of the wilderness green forever
Gigantija dreams:

Dreams that she sees again
out of the few small huts erected near her
two by two issuing, slowly approaching,
the faces she loves.

They enter; suddenly the temple
is filled with a throng of women, children, men,
wan faces; on each face can be read a look
of fear and sadness.

A voice is heard echoing:
‘For to dispel the famine that would destroy us
the gods desire forthwith, that they may forgive us,
a maiden to die for us.’

A fearful clamour goes up,
weeping and sobbing, with the murmur of many voices;
The dread of death possesses the hapless multitude
hungry these long months.

But amid all the shouting,
while every voice bewails the grievous tragedy
a maiden, golden-tressed, blue of eye, pale
steps out of the throng

And she cries in a loud voice:
‘Since my arms are of no avail against this
I will give to the gods my life and youth, I
will die for Gozo.’

Then the altar smokes
and there commences the fading anthem of death,
the drums softly rumble out the last lament,
the earth is blood-drenched.

The morrow Gozo was verdant,
our fields were overflowing with fatness and corn,
every one ate and drank, many made revel,
every heart rejoiced.

It is of this that, under the moon
all through the sweet hours of the summer nights
there in the hush of the wilderness green forever
Gigantija dreams.

Another enigmatic aspect of these Temple Builders’ culture are the voluptuously curved figures that have been found among the stones, both as carvings on the megaliths and as smaller stone icons. Some of the figures are androgynous, and could as easily be modern-day sumo wrestlers as bountiful women. 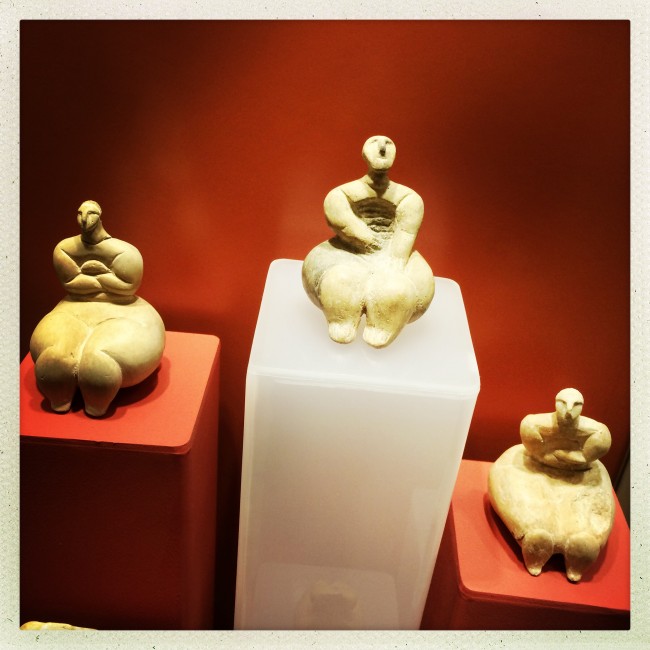 Most of them do not have heads attached, but small indents where the peg of a replaceable head could be slotted in. The same bodies matched with different heads. A bit like the poet Pisani, and I, walking around here and imagining new echoes in the silence of the stones, or the other cultures that used the sites as funeral pyres in the millennia in between. Same stones — different stories.

I wonder what these megaliths might whisper to you, from prehistory or from your own imagination? Now you know where to find them to go listen… 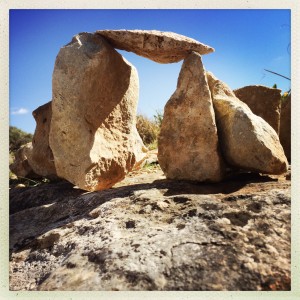 What is this megalithic structure? 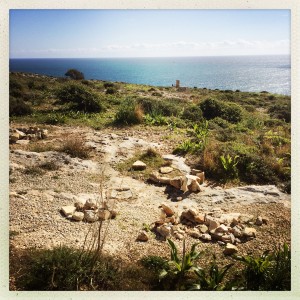 Oh! It’s a mini-lith… can you spot it in the landscape?