Malta Marathon and on and on 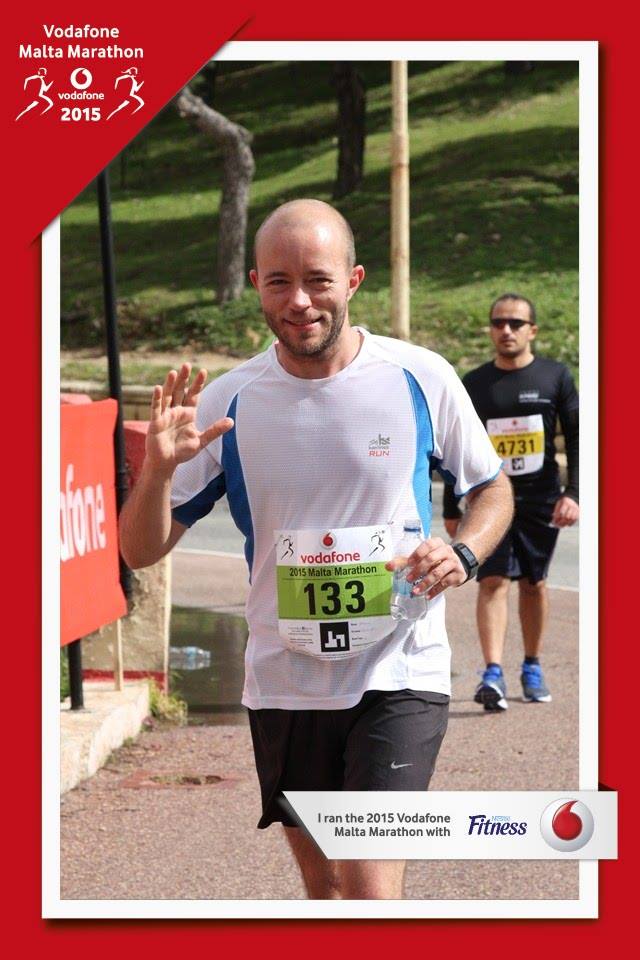 There is a storm brewing and the sun has yet to rise. People are walking around, sparsely and a bit aimlessly, with what appear to be focussed looks on their faces. It is hard to see much though – it still looks and feels very much like the dark of night, despite everyone here having been up for hours already.

It is the beginning of the Malta Marathon, and there is an hour to go till the start gun.

Across from the metal bench I have laid a claim to, there is a vast stone fortification, floodlit and impressive. In front of it, all the branches on the cypress trees are swaying wildly, as gusts of wind blast through this square in M’dina. The same wind ruffles the black bin liner bags that some people have wrapped round their upper bodies, or legs in my case. Shorts alone are not really enough with this kind of exposure to the elements while waiting to get in motion.

It is supposed to rain later too – I just hope it will wait till I am somewhere warm and sheltered, like my hotel bed, which is beckoning me very intensely right now!

And yet, I also feel little rushes of excitement. This is my first attempt at a marathon, after three half-marathons these last two years. I wonder if I will be able to run the whole distance (42.2km) and I wonder how my body will get on… not to mention my mind. I have been discovering the hold that my mind has over my body these last few days, with all sorts of colourful psychosomatic symptoms appearing, although I know I am fundamentally fit enough to do this run.

“The hay is in the barn” echoes in my mind, from a runners’ online forum, where other amateur runners like me were asking coaches whether illness within a few weeks of a marathon would ruin all their training. No, if you are in fair health on the day of the run, fever free and physically capable, then the training hay is in the body barn, and it will see you through the marathon-winter…

The flu I was down with last week does feel like a world away right now, as the sky starts to lighten and even more runners appear. There will be around 800 of us, marathon runner hopefuls, here today, along with 3000 or so half-marathon runners joining the route way up ahead somewhere.

My mind is enjoying having some numbers, an illusion of certainty, to cling to right now. A mixture of focus and distraction to keep things flowing in my being while I wait.

My runner number is 133, and it is attached to my top with safety pins. When I get to unpin it, this will all be over, and I will do nothing but rest… That thought is also feels good for my mind – the reward that awaits, after many months of training: peaceful inertia!

With that, I will go queue for the portaloos, hand in my jacket and phone in the black bin liner that I will hopefully be reunited with at the end — and let my thoughts float for the four hours or so of this little Sunday run.

When I next write, I hope to be one of those people who have run a marathon!

And so I ran.
And walked.
And ran a bit more.
And then walked because it was the only option.
And somehow managed a final jog to the finish line at 42.2km.
And then had no proper use of my legs for three days!

If you are curious about marathon pain and grit, then read on…

The storm hit about two hours in to the marathon, right as I was leaving my comfort zone of the half marathon distance of 21.1km. The rain lashed down, with gusts of wind that left me immobile, even as my legs appeared to be moving, without gaining any distance. The varying degrees of hillsides on the course became waterslides, with sheets of water coursing down them, and my feet did not stand a chance of staying dry. 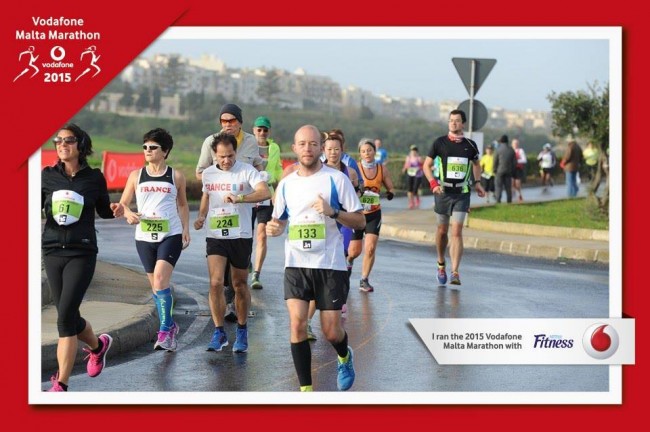 Then I thought I had taken a wrong turn, as I suddenly joined a road that was full of walkers in fancy dress! But no, the marathon and half-marathon runners were fully intended to zigzag their way through a throng of walkathoners who were sharing the same road toward the coast. This was an enormous psychological challenge for me, as I am very much carried along by the group movement when I participate in a distance running event. So to be among walkers, with just the rarest fellow runner around, was very unsupportive as I battled with “hitting the wall” and every fibre in my legs telling me to stop moving right then.

At the 30km mark, I allowed myself my first walk to recover a bit — such a change of locomotion gait even from a very slow running movement. I quickly discovered, to my dismay, that it hurt as much to walk as to run at this stage! Consequently, I willed myself into running again whenever I could.

My eyes also kept darting to my GPS watch that was keeping tabs on my time, distance and pace. I tried not to read the burnt calories number, since it made me very worried about having nothing left in the tank! I saw how my projected finishing time was getting later and later. So much for my hopes of a four-hour finish… On the Malta Marathon application form, there was a clear notice that anyone not finishing within five hours would NOT get a finisher’s medal. That, mixed with growing anger at how ridiculous a marathon distance is to run, kept me pushing forward even as I knew my body was taking heavy damage in the process.

I never expected that I would be able to use annoyance and anger as fuel when my body had nothing left to give, even with the glucose supplements I was taking on a carefully planned schedule. However, it seems that swearing under my breath and calling the whole idea of a marathon all sorts of colourful names is a valid energy source for forward propulsion! A wonderful reminder for the spiritually inclined!

Then there were 8km left, and it felt like forever, made worse by the fact that I now knew where I was on the Maltese road network, having driven there a few days earlier, and realising how far I still had to go. There is a certain bliss of ignorance in not having a clue where one is, but simply moving forward…

Pain, swearing, stupid photographers I had to run past to keep my pride intact, more pain, pavements to climb up and down (felt like Everest), desperately needing to pee but not a Portaloo or even a bush in sight along the coastline now, and more pain… 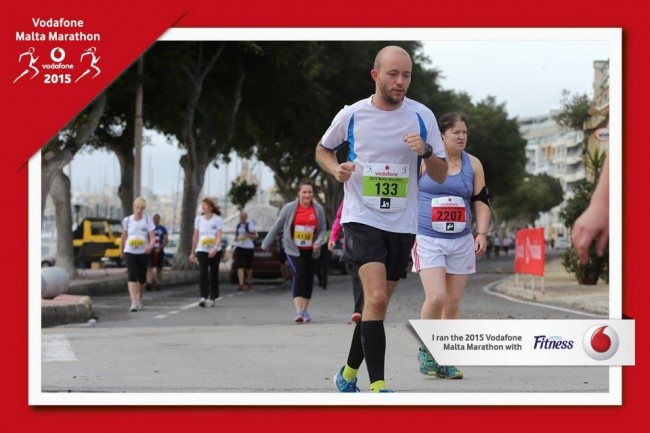 Worrying seriously that I would lose my right big toe nail, not understanding at all how my intercostal muscles between my ribs could possibly be hurting so much, walking a bit more, trying to smile at a genteel bystander encouraging me on, getting overtaken by a runner who must have been at least 75 years old, staring at my GPS watch where the distance just seems frozen while time is accelerating…

Then finally, at long last, the finish line finally came in sight — after I had been using everything from self-hypnosis to energy healing work (as well as the quiet swearing) to continue onward for he last stretch, and I managed to switch to a moderate running pace to cross the line in style.

Except that it was not the finish line, but just a giant air-filled arch around 400 metres from the actual finish line.

I cannot describe how long that last stretch felt, as there was no way I could stop running in front of all the spectators and photographers… So yes, I guess I can add fear of embarrassment to the list of valid fuel sources!

My finishing place was no. 545 out of 645 intrepid marathon runners, and my time was 4 hours and 43 minutes. And I am not about to do this to myself again in a hurry — or ever! I can completely relate to the 150 or so runners who must have dropped out along the way, or perhaps did not turn up at all given the weather forecast, and I feel very grateful for my body and mind’s resourcefulness for finding whatever it took to keep on going.

The jury is still out on whether my big toe nail is staying on or not, three days later, as I am on the plane home — but at least my shiny finisher’s medal is safely in my rucksack, and the joy of that will last much longer than it takes for a toe nail to grow back!