Scenes from the Desert 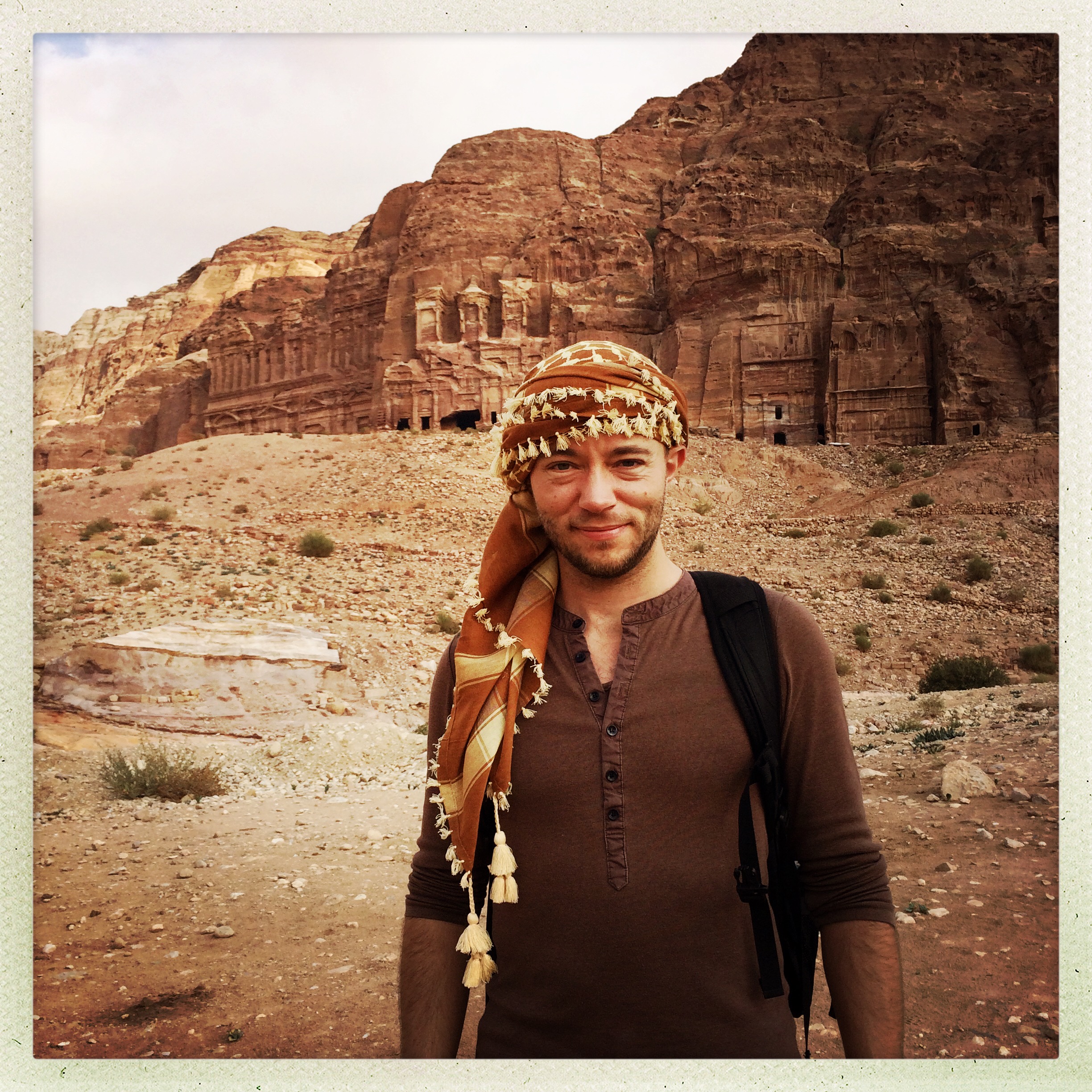 Let me paint a scene in your mind, with brush strokes broad enough for desert vastness and vagaries.
In the centre of this scene there is a portaloo – a temporary toilet cabin made of plastic, for those unfamiliar with the word – and from inside it, an attractive young woman is peeking out through the crack in the door. She is both annoyed and a little bit afraid, and, most of all, wants to be anywhere other than there.

The landscape is orange, brown and red, with the rock and sand in windswept formations. Around the portaloo, five donkeys are trotting, each with a rider on top. No one else is within sight or earshot.
As they circle round, one of the donkey riders is calling out “My love! My love! I spent all day searching for you!” with impressive rolling of all the Rs, and heartfelt emotion in his voice. He is a young Bedouin man from the local tribe, with more than a passing resemblance to Captain Jack Sparrow in “The Pirates of the Caribbean”. A dusty red scarf covers his head, and black kohl eyeliner accentuates his deep brown eyes — while also making the glaring sun more bearable for him and helping to channel the dust from his eyes. 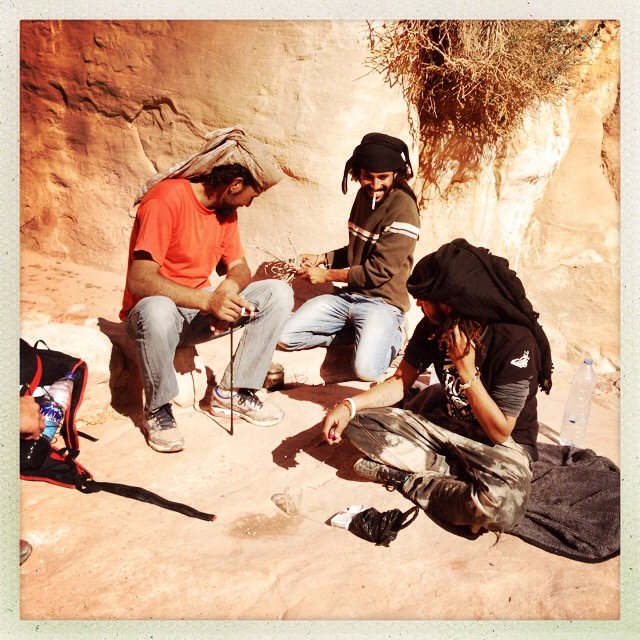 His “love” is sitting inside the portaloo, wishing he would go away, and take his donkey rider friends with him.

Another one of the donkey riders is blonde with wild hair knotted in messy dreadlocks. She rides as well as any of the men, but she was not born in a cave like them. She is Dutch by nationality, and one of five white women who live with the tribe around Petra, married to one of the Jack Sparrow lookalikes. She wants the young woman in the portaloo to see life through the eyes of the tribe, and to have a very different experience to the norm of the western world. In short, she is recruiting!
The tipping point from fear to anger suddenly arrives for the young woman in the portaloo, and she explodes out in a rage…

“Listen, lady!” she starts out, completely ignoring her would-be lover aching with his longing for her. She asserts, with no quaver of uncertainty, how she had a nice tea with the young guy yesterday and some interesting conversation, but that is all, and nothing more is going to happen… They should leave her alone as she just wants to enjoy the landscape by herself.

As our paint brush lifts after drawing the determined and no-nonsense furrow on her brow, we will move on from this scene. She is going to be all right, and the donkey riders will go back to their cave… and hopefully find a more reciprocal love elsewhere for the eager young Bedouin man.

We move to a hill crest close to the holy site of Mount Nebo, where a versatile shack serves as a cafe-bathroom-view point over the desert, as it clings precariously to the side of the rocks.

In this scene, I am standing with the tourism police officer who has been accompanying our band of adventurers. He also hails from a Bedouin tribe, but wears a full and authoritative uniform. Without explanation, he is pinning a round black badge with a silver skull and crossed curved swords onto my shirt.

I noticed him wearing it on his uniform shirt earlier in the day and asked what it meant — I joked: “Are you a dangerous man?” He grinned back, happy that I was interested in him and his badges, and explained it means he can carry a gun and is trained to use lethal force. Or something like that, based on the absolute minimum of words we both understand in English and Arabic. 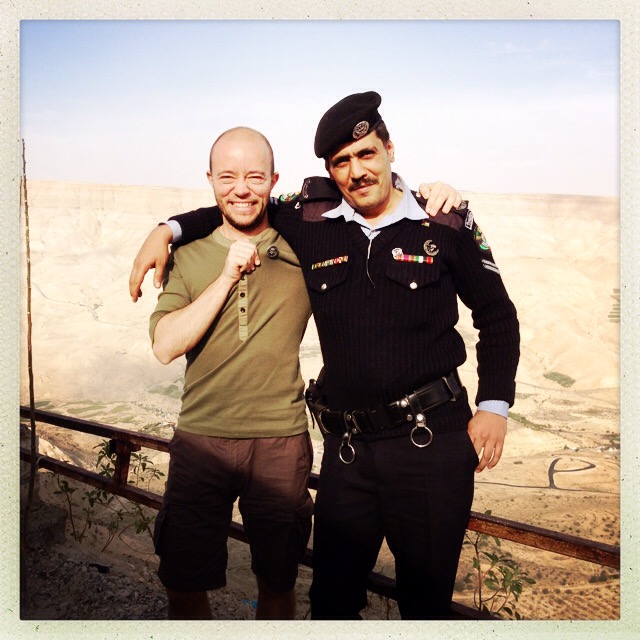 He detaches the badge from my shirt again, and this time, smiling broadly, he says: “Me… to you!” pointing first to himself, then to me, as he moves the badge toward me again, and reattaches it to my shirt. So it is a gift! I am very touched by this unexpected gesture, and do not even know if it is legal for a police officer to give away any of his badges… But since he is the only police officer around, and he does not seem to have an issue with it, then why not receive it with all the glee of my inner child, who just got a BADGE from a POLICE MAN?!

I push my luck and ask if his gun comes with it, and we both roar with laughter…

After adding some extra twinkle from the desert sunshine to my new badge, with a fine brush dusted with Bedouin kindness, we can move on from this scene.

For the final desert scene, our brush is going to be in constant swaying motion — blues in the morning skies above, and yellow, grey and red for the landscapes of Wadi Rum that we move through. 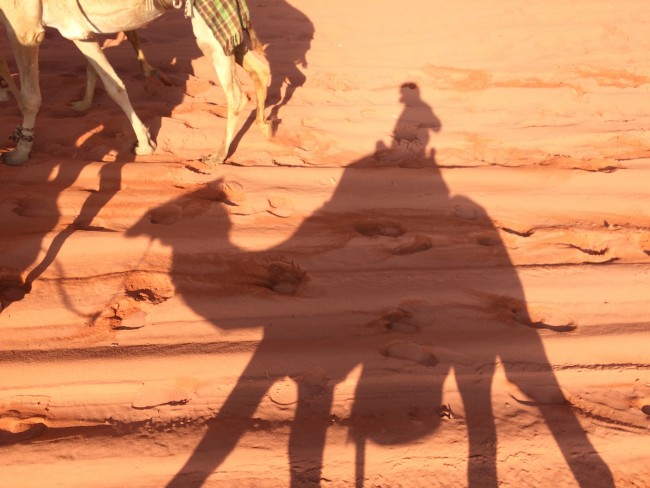 We are in a camel train, sitting atop these ships of the desert, being led by two Bedouin men. Bright patches of colour adorn the saddles which are assembled from various bits of cloth and hand-carved wooden handles. The camels are many shades of brown, and even white in some places, below the fine dusting of sand. Some are quite furry with perm-like curls, particularly on the front legs and the head, while others are sleek with the shortest covering of hair.

As we roll our way forward, over dunes, along the side of cliffs and through patches of dry bristly vegetation, my head starts to loll with peaceful sleepiness.

Everything becomes very quiet, and time ceases to matter. The camel moves step by step, step by step, following the camel in front, as the breeze blows lightly on my face. The wide expanse of the desert opens and closes with the canyons and valleys between the stone cliffs of Wadi Rum.

A gentle wave of inspiration comes to me… When I do energy healing with clients, I give thanks at the end of the session to recognise all the support I receive in my work. The last gratitude always goes to the One, the spiritual energy that pervades everything. I often choose an aspect of the One that was present in the healing, for example poverty, kidney stones, a broken heart, or bureaucracy, and I bow from that perspective of the One to my client.

This camel ride gives me a new perspective to bow from, and a new way to put experiences into perspective, too.

All I need to do is ask myself: “How does this situation appear, from atop a camel train in the desert?” I feel how it immediately calms my being. I will get where I am going, step by step, as sun and wind kiss my face, and I trust Creation as it carries me along.

The last brush strokes will be with a very fine tip, elongating the beautiful eyelashes of my camel steed that protect its eyes from the sun, and adding a warm glow to its eye, which will be able to recognise me even a year from now if I return to Wadi Rum. Camels reward friendly treatment from its rider with affection, and counter aggressive treatment with attack or evasion.

My desert ship and I, step by step, in the midst of the One…

Our tour guide says that when he dies, he wishes to be buried in the desert of Wadi Rum. “Come visit my soul in Wadi Rum,” he invites us, with a grin. You will find him, the Bedouins, the camels, your own stories, brush strokes, and all of the One right here. 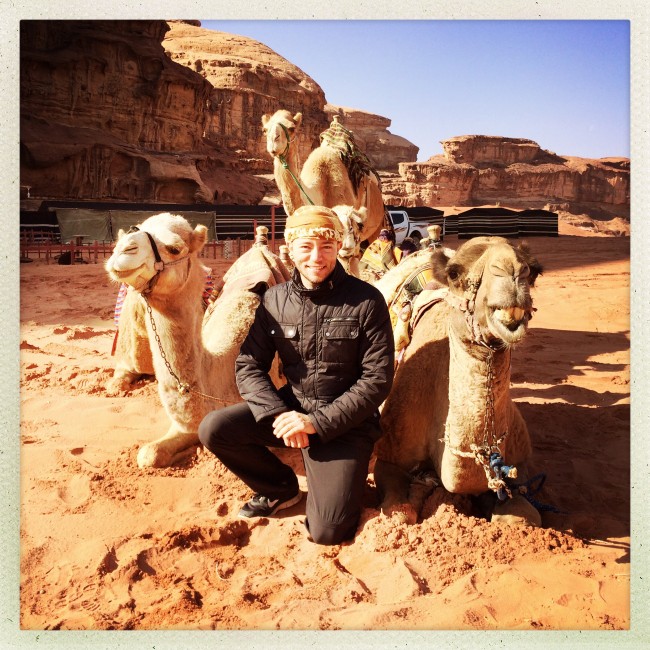