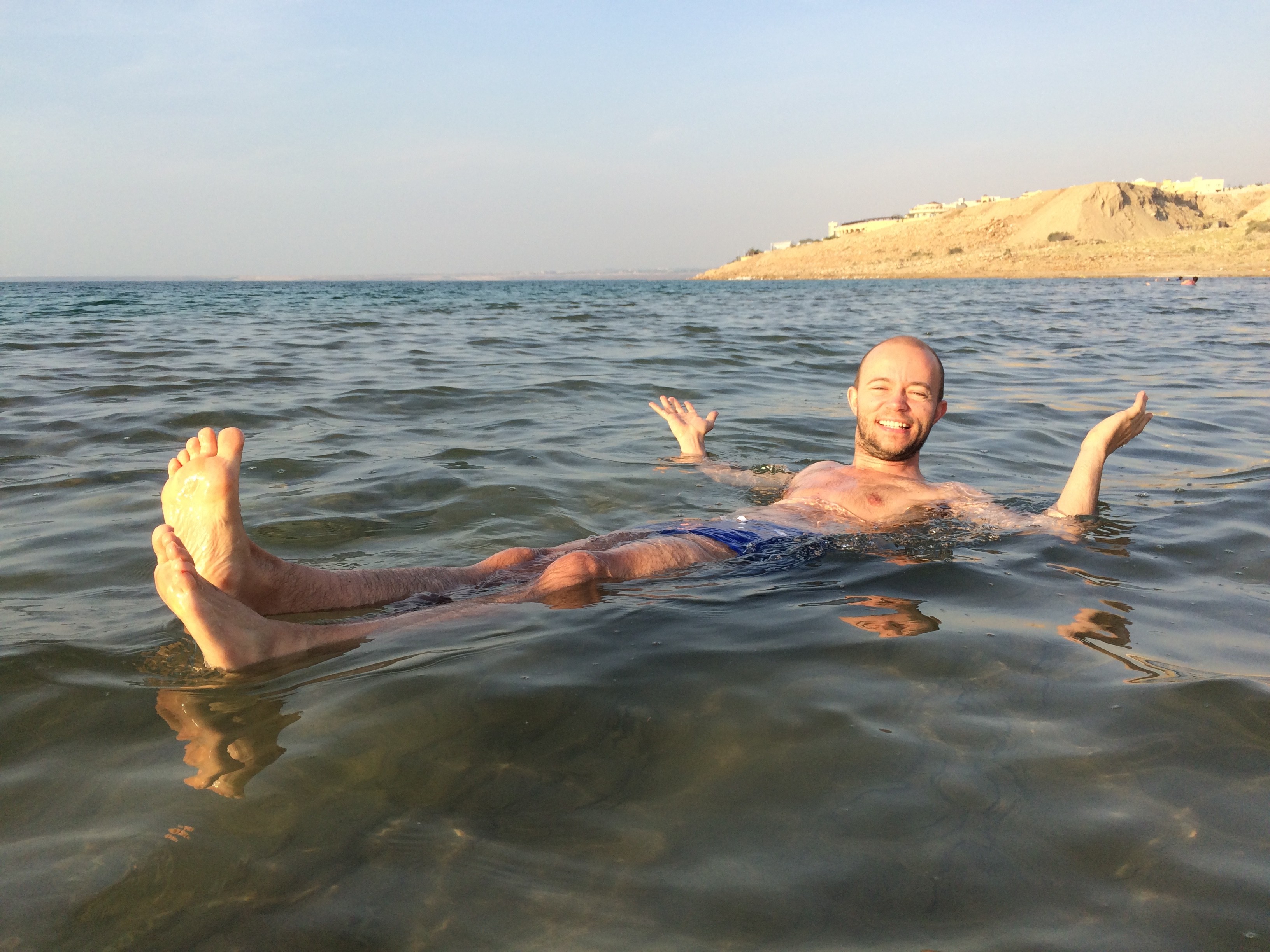 The country of Jordan’s name comes from an old Aramaic phrase that means “floating river”. The river, also named the Jordan, may not be wide, but it is the fastest flowing river in the world, heading from heights of 400m at Tiberias Lake down towards the Dead Sea at 400m below sea level.

Among all the rocks and sand of the country of Jordan, beyond the narrow confines of its river, floating might not be the first thing that comes to mind. But, as my first day here unfolds, the sensation of floating is actually never that far away…

Floating on scents of olive and juniper, mixed with dry earth and stale tobacco on leather coats, I navigate through a small marketplace. The locals are selling glass bottles with multicoloured sand in layers that form simple images. It makes sense: if nature gives you a desert, sand is your treasure. 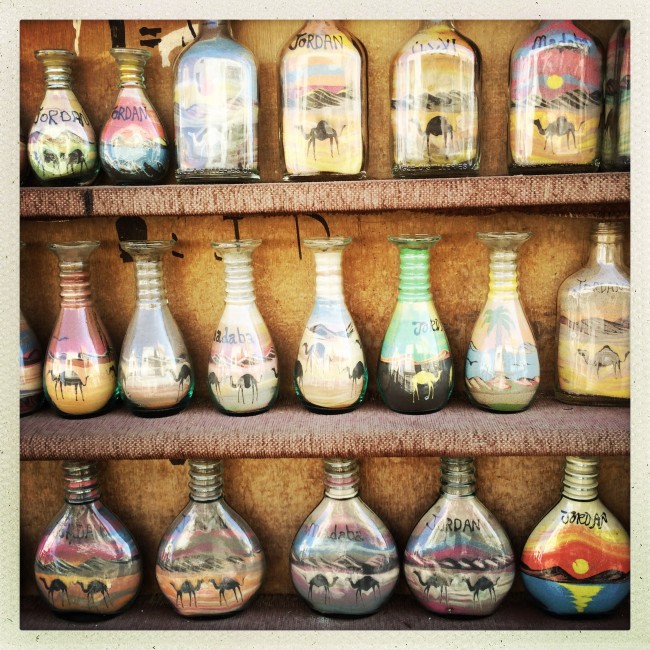 Floating on the currents of time, as our guide takes us to the Temple of Artemis in Jerash, I wonder whether crusaders were here, just moments before he tells us that crusaders used the temple as a fortress for a period. And more flashes from other (life)times as I look at the carved stones, surrounded by high Corinthian style columns, and see, with my inner eye, crusaders kneeling down on one knee on that very floor, earnest in their faith. 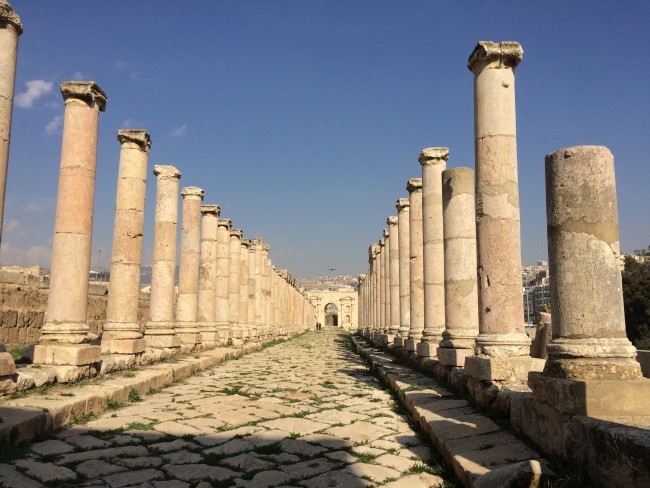 Floating at a leisurely running speed on the chunky flagstones of the long straight Roman road through Jerash, from the North Gate to Hadrian’s Gate, I tick off yet another marathon training session. I run, in the midday winter sun, to the wonderment of other tourists and their guides, and to the great amusement of souvenir sellers, who shout their encouragements from the shade. I run, and my spirits float.

Floating on the tunes of a bagpipe and drum, played in an ancient amphitheatre with impressive acoustics, by men in desert clothes, I sit on a stone row very high up, on a seat carved with an Epsilon. In the days when this was first used, over 1000 years ago, a spectator would have a “ticket” on a slab of clay with this very row number and seat letter. The bagpipe tradition arrived in Jordan much later, less than 100 years ago, with the British Army regiments that operated here.

Floating between waking and dreaming, as the winter heat bathes the tourist minibus and the almost empty highway, the line between this reality and others blurs so easily. I dream over and over that I am negotiating something or other, and it tires me in the dream and I long for waking, while my body is so tired in waking that I long for more sleep…

Floating in the salty waters of the Dead Sea, I enjoy the anti-gravity effect far too much to wonder about the physics (“How does this work!?”). I have never been able to float in water before, and it feels as miraculous as if I had risen up and walked on its surface. The river Jordan, which feeds into the Dead Sea, is where Jesus was baptised. I am on the verges of holy places – a promising territory for miracles! 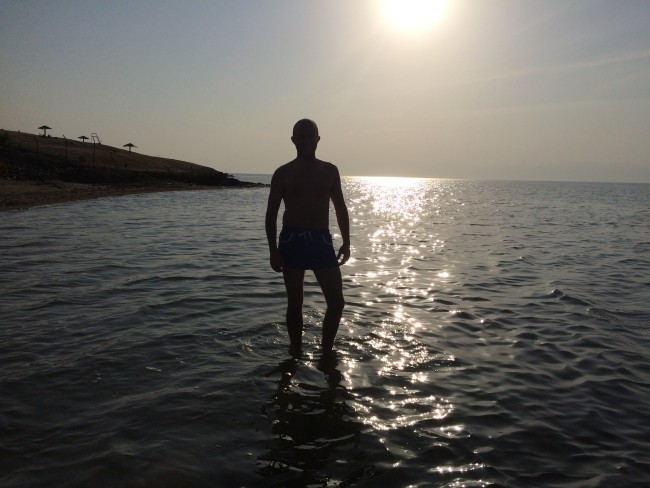 Floating along in the minibus once again, this time in the narrow slipstream behind an ambulance, through dense rush-hour traffic on the main highway into Amman… A huge truck has tipped over onto its side, and the tourist police officer, who accompanies our every move, makes a great spectacle of trying to get the ambulance through the mayhem faster by adding more sirens and more flashing lights to the mix. I am not sure it makes any difference, but his zeal is impressive.

I float on these waves of new impressions from the lands of Jordan, where notions such as Aramaic and Greek, past and present, Roman and Arabic, gravity and weightlessness, are about as fixed as the desert sands.